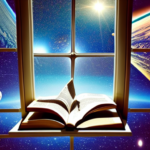 Space Midrash
7: Why ‘drash on Space?

In this episode of Space Midrash, Jacob turns inward and explains what the show is about. Following a request from his daughter to explain in an episode what Space Midrash means, Jacob produced this episode. Not only does he unpack the meaning of the name, he explains what Jewish civilization means and why he doesn’t say Judaism or Jewish culture. Similarly, he waxes poetic about how far into the space age we are and what that really means.

Thank you for listening to Space Midrash. I believe in an ethical, artful, and inclusive humanity thriving amongst the cosmos, but we will only become those people if we can tell the story to inspire us to be those people.

You are listening to space midrash. This is episode seven, titled why ‘drash on Space. In this episode of Space Midrash, we’re going to turn inward and explain our mission, vision, and game plan. We will discuss what is Jewish civilization, what is the space age, and how does Space Midrash fit in?

My name is Jacob. I’m a father of four, and my daughter, who is a kindergartener, recently asked me, what does Space Midrash mean? And while I explained her what the title means, she asked me to make an episode explaining this. But to do that, I feel I also need to get into why I’m doing this.

Why I believe in doing this is that the space age, with all its prosperity and advancement, is going to bring about a huge narrative collapse. Great thinkers had already saw this coming. Carl Jung had described it. But it doesn’t have to be frightening, especially for established cultures and civilizations that can embrace the unknown and channel it through storytelling. So this is Space midrash episode seven. Why ‘drash on space?

Next, we’re going to discuss the space age. Turn on the news, and you will see a rocket launch every single week. High schoolers are sending up science experiments into the space station plans of Mars, plans of hotels orbiting above the Earth. It’s an amazing time to be alive. The space age is not just a pursuit of, uh, science or technology. The space age is a paradigm change. Our concept of space on Earth tends to be linear and flat, and we think that a solar system is like this disk, and all the planets are on the same level, but really, space is moving out in every infinite direction, and there is just an infinite amount that we have not even begun to know. And the space age is where we’ve come as a humanity. Cognitively, we can understand things we can only see as blips on our radar, and we can imagine it.

And we reach this technical point where we’re deep into the space age 2022. There are new companies and startups, as well as students of all ages participating in the science and the industry that is outer space, and it is calling and catalyzing people to come forward into it. The space age is the possibility for humanity to see ourselves in a bigger way than we do right now. I’ve created Space midrash as a special show. Space Midrash is my mission to probe the intersection of Jewish civilization and the space age.

The truth is, we’re on a ball floating through space, and our technology has brought us to the point where we can no longer live in ignorance of that fact. Instead, we’re being thrust forward into that reality. As a result, much of the storytelling that we’ve told for generations will not hold up scrutiny against what we’re coming to know. It’s not the end. It actually means the continuity of who we’re always evolving into being. And the only way to be present is to be storytelling, to tell the story of how we got here and where we’re going. Jewish history has been one of narrative collapse, of historical and social change. Yet in every episode in history, Jewish people have looked into their present moment. They drew on the past and they told a powerful story that inspired and brought Jewish civilization forward into a new, previously unimaginable future.

So Space Midrash is these two words. Space being this infinite, awe-filled cosmos that’s just begging us to come and know it, to become greater through it.

Then Midrash: It’s this Jewish word. It’s this means to uncover or to inquire, to find a deeper meaning by considering what’s lacking in a story or what’s just one word that we could go deeper into or what’s something we’ve known for the longest amount of time. So now we can tell it new in a new way, that we can hear right now with what we’ve learned since the story was first told.

So Space Midrash is that I want to retune, recalibrate, make this a moment where Jewish civilization worldwide can look at itself and look at each other and look forward. This is a time to reinvent chutzpah for humanity. And so I see that the space age is this opportunity because everyone’s talking about science or technology or money. I want to talk about society and people and value in the space age. So that is why I made space midrash.

I want to say what’s not being said, I also want to inspire, because at every point in time that Judaism and Jewish civilization had to reinvent itself, in the longer term, that was better for what was Jewish, and it was good for what is humanity in the world. If the magnitude of human experience is going to exponentially grow because of the space age, then what is Jewish and what could be Jewish leadership can also exponentially grow. And so that’s why there’s space midrash. Let’s ‘drash about it. Let’s talk about it. Let’s get into it. Let’s turn it over as much as we can so that we can tell a story that inspires us to be the greatest version of ourselves.

But if we don’t consider it now, we may not be able to lead ourselves through this transition. So with that space Midrash is born. I appreciate you listening. Seven episodes, and I’ve written a few articles. I’ve had 100 conversations. We’re just at the beginning. There’s so much more conversation to have. I hope this is a good enough explanation for my daughter Shiraz, who asked me to do this episode. I do it for her. I do it for all my kids. I love you so much. I hope that if you become astronaut, or if you’re in the space station, that I can come visit. This has been Space midrash episode seven.