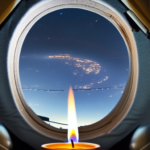 In this episode, Jacob recalls the two Space Shuttle disasters and the Jewish Crew members aboard those flights.

Astronauts inspire me not just because they bring the best of themselves but because they bring all of humanity forward into space. My name is Jacob Sager and I started Space Midrash to inspire the next generation to launch the best of Jewish civilization into the cosmos. This is Space Midrash episode Six titled “Remembering the Fallen Jewish Astronauts.” This episode is about the lives of the Jewish astronauts who were in each of the space shuttle disasters.

The space shuttle Challenger exploded shortly after launch on January 28, 1986 and the space shuttle Columbia disintegrated upon reentry on February 1st 2003. These are the only two space shuttle disasters in the program’s history and each had a Jewish crew member. We will begin with the history of the disasters and continue with a profile of each of the Jewish astronauts. We’ll start with Judith Resnick, first Jewish American in space. And we’ll continue with Ilan Ramon, the first Israeli in space.

I’m Jacob Sager, native Texan and space aficionado. Until last year really opened up commercial space tourism, there had only been 16 professional Jewish astronauts and two of them died in the two respective space shuttle disasters. They were brilliant, deep, and beloved people. Unfortunately, there’s a major misconception that those two Jewish astronauts Judith Resnick and Ilan Ramon that they were the only Jewish astronauts in the whole history of the human space program. I’ve heard from many people who are much smarter than myself who believe this that there were only two Jewish astronauts and they both died. It’s become almost a superstitious belief for them.

This popular misconception is likely held due to general low interest in the space program. The truth is, Ilan Ramon was the 12th Jewish astronaut to go to space and since he went there have been six more Jewish astronauts four professional astronauts and two commercial tourists. It’s amazing.

I’m Jacob Sager, a father of four who is constantly reading. I wanted to be an astronaut when I was growing up but that fell apart when the Columbia disaster shattered my belief that there would be opportunities to be an astronaut as a random Jewish guy like myself. However, turning on the news nowadays and tuning into the present moment it’s clear the space age has arrived and we are unprepared.

Space Midrash is my mission to chronicle and syndicate the stories of Jewish people leading us forward into the space age. This is episode six of Space Midrash: “Remembering the fallen Jewish astronauts.” In this first part of the episode we’re going to go over both shuttle disasters chronologically. So we’ll start with the Challenger disaster.

The Challenger disaster took place on the 28 February 1986. 35 years ago from the day of this episode release it was the 18th of the month of Shevat in the year 5746 on the Hebrew calendar. What happened was following multiple reschedulings, due to record cold conditions, the Challenger exploded shortly after takeoff over the ocean before reaching orbit due to the cold temperature. There was an issue where one of the rings did not seal the gas properly and it exploded. This flight had special significance in that Krista McAuliffe, who was a classroom teacher, was on board and her students would be watching. But not just her students. Students across the United States watched the Challenger launch and explode live in the classroom.

The Columbia disaster took place on 1 February 2003. It was the 29th of Shevat 5763 on the Hebrew calendar. During its return from a successful 16 day mission, the Space shuttle Columbia broke up during reentry into the atmosphere. During takeoff, some of the insulation on one of the solid rocket boosters hit the orbiter, the plane part of the shuttle, and it caused damage that led to structural integrity when coming back through the atmosphere. The mission was special because Ilan Ramon, payload specialist and accomplished pilot, was the first Israeli astronaut.

In retrospect, it’s a bit auspicious that the dates of each disaster fall within the same week, but they occurred under different circumstances. Both disasters grounded shuttle flights until investigations and improvements could be made. Both disasters shocked a new generation of schoolchildren who felt more distant from the accomplishments of those astronauts and further estranged from the future of the space program. As space opens up to more people, we remember those who perished and we remember these awful disasters to bring the best of these heroes and to be inspired to bring the best of ourselves into the next chapter.

So in this next part, we’re going to go over the lives and careers of the Jewish astronauts from those shuttle flights, beginning with Judith Resnick, who was a mission specialist on the Challenger. Judith Resnick was born in Acron, Ohio to Ukrainian immigrants. She was Bat – Mitzvah, got a perfect score on her SAT, achieved nearly perfect scores when qualifying for a pilot. While she was finishing her PhD in electrical engineering, she learned played piano. She built circuitry for radar for the Navy while training as an astronaut. Among the many things she was doing for NASA, she developed remote control software and robotics. And as an astronaut, she was a well liked crew mate.

She flew two missions. First on the inaugural flight of the Space shuttle Discovery in 1984, and lastly on the fateful final journey of the Space shuttle Challenger in 1986. If she were alive today, she would continue to be an accomplished engineer and a popular speaker at Jewish communities and universities worldwide. Judith Resnick, mission specialist who died on the Challenger disaster. May her memory be a blessing.

In the next part, we’re going to talk about Ilan Ramon, who was a payload specialist on the Space Shuttle Columbia. Ilan Ramon was born Elan Wolferman in Ramat, Gan, Israel, the parents who had fled Europe, his father having escaped Germany and his mother and grandmother having come from Poland and survived Auschwitz. He “Hebraicized” his name from Wolfram to Ramon when he joined the Israeli Air Force, which was customary and expected among rising leadership at the time. He served 26 years as a pilot and a commander in the Air Force. His leadership experience led him into newer and more advanced flight programs for the Israeli Air Force, and he accumulated thousands and thousands of flight hours, both in training and in real combat situations. Ramon famously took part in an F 16 strike against a nuclear reactor in Iraq. Once he was made colonel, he served as a department head until he left for NASA in 1998.

He spent 16 days in space aboard Space Shuttle Columbia, where he held himself as a Jewish leader. He had requested kosher food and carried with him some very special objects, such as an artwork from a child who perished in Auschwitz, a microfiche Torah that he received from the President of Israel, a miniature Torah scroll which had survived Bergen Beltson concentration camp, a special mezuzah and a dollar from the Lubuvatcher Rebbe. This was his only flight. If Ilan Ramon were alive today, he’d be a leader in space aviation and an international advocate for Jewish life in space. Ilan Ramone, payload specialist who died on the Columbia disaster. May his memory be a blessing.