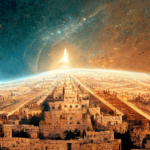 In this episode, Jacob defines the three types of Jewish tourism, outlines the current and expected modes of Space tourism, and finally mashes them together to explain how Jewish Space Tourism will start out.

You are listening to space midrash. I am your host, Jacob Sager. I believe in an artful, ethical and inclusive humanity thriving amongst the cosmos. We are on a mission together to probe the intersection of Jewish civilization in the space age. This is Episode 19 of Space Midrash titled Jewish Space Tourism. In this episode of Space Midrash, let’s talk about Jewish space tourism. So there’s a few aspects to go over in this episode. The first will be to define what is Jewish tourism, what does that look like, how does that occur on planet Earth currently? And then let’s talk about the different dimensions of space tourism as they currently exist right now and will continue to expand in the upcoming years. And then lastly, let’s mesh those two together and talk about Jewish space tourism, which will be an exciting time and exciting opportunity for a lot of people.

The second is holiday tourism. For example, people go to destinations for Passover, like an all inclusive cruise where it’s all Kosher  a la Passover or a casino that might have the same sort of thing. People also similarly will go and visit certain places on planet Earth that might be closely associated with the holiday or to visit family for Hanukkah or to visit family for Rosh Hashana. But uh, that’s another piece of Jewish tourism. And Jewish traveling is to coincide with holidays. Particularly Pesach is a very much one of traveling, but other holidays as well. And lastly, I would say is ah, a bit of life cycle Jewish tourism. I don’t know of too many destination Bar or bat Mitzvah, other than some that take place either at a beloved destination synagogue or temple that may be in like a different city or country that has a particular meaning to a family. Or people going to Jerusalem to have Bar Mitzvah or Bar Mitzvah closer to where the temple stood. Same for weddings. I know people do destination weddings and we’ll take the chuppah and go and be in a country that they don’t actually know anyone and just be at a beautiful resort and have just a nice amount of really close people there. So it’s another part is this life cycle picking maybe like a bar or bat Mitzvah, a wedding or something else, a retirement or a celebration of life of someone else. So those are the three aspects of Jewish tourism that I would say take place.

So space tourism is opening up. Let’s talk about space tourism next. So here are the modes of space tourism as of right now. First is you can go up and you can kiss the Carmen line. That is what Blue Origin and Virgin Galactic are offering: short trips to high paying ticket customers that go like right at the edge of space. Virgin Galactic doesn’t quite cross it and the Blue Virgin capsule just barely crosses it right before it starts coming back down. And you get to see the curvature of the Earth and the blackness of space from there. And another way is there are a few companies that, uh, there’s a company that’s going to be doing high altitude balloons. You’ll never be in a low gravity or microgravity situation like you would in the Virgin Galactic or the Blue Origin situation. But in these balloons you’ll go up so high that you will be able to see the blackness of space and the curvature of Earth and the entire peninsula of Florida, if that’s where you’re launching from. It’s quite a space perspective. But it’s like I say, space and quotes for that one. One of the next things that’s already taking place is you can go as a commercial tourist on real space missions. For instance, we have had two Jewish space tourists or commercial astronauts that have gone into space. One was Jared Isaacman who went on a SpaceX flight. The inspiration for mission. We also have Eytan Stibbe who is an Israeli pilot who became an astronaut through Axiom Space to go be a mission specialist aboard the International Space Station. So going to the International Space Station as a member of a crew or going on one of these other SpaceX flights as a crew is an option for space tourism. What also is coming out is a company called Orbital Assembly says that they will have an early space hotel space station within a few years and that there will be more of them in bigger ones in subsequent years. And they’re not the only company offering space stations as a destination for non professional astronauts, which is exciting. It just means that there’s a lot more of this. So there’s these destinations in space and surely soon enough, after we make it more commonplace again, a destination will be the Moon and Mars for tourism. So those are the dimensions of space tourism as they currently exist and will start to exist. Coming up, what I want to talk about is Jewish space tourism, which I think will be awesome.

I am looking forward to breaking matza in a space station, looking down upon planet Earth. I think that would be so awesome. So the ideas and I’m thinking of for space tourism in the future would be holiday tourism. Going to a space station four passover or right before Rosh Hashana, or right between Rosh Hashana and Yom kippur, flying up and crossing the Karmen line to see all of space. Because something about that during the time, during the days of awe to do that. Or going to the moon for Shavuot, that could be really cool. I don’t know. I don’t have a spiritual or thematic significance there, just that the destinations that are involved in space will be part of it. So when you match the destinations to either these holiday events, it would be the holiday or lifecycle events, maybe a bar mitzvah up on a space station for some super sweet billionaire child. But obviously, heritage tourism won’t take place, at least not at first, because there is no Jewish heritage to visit per se. Most of the Jewish heritage that has taken place in space so far, has taken place on vehicles which aren’t in orbit at that moment. I would say eventually there would be some Jewish heritage tourism. That’s all I have to say about that. Jewish space tourism in the year 2022. The last year and a half has shown us so much space tourism. I do believe in the next seven years, we will see our first Jewish space tourism event. I’m hoping it will be a Passover Seder in a space hotel. That’s what I’m pushing for. I am literally talking to people about this all the time, but we’ll see what it is and we’ll do an episode on it when that day occurs.

Thank you so much for listening to Space Midrash. This has been Episode 19 titled Jewish Space Tourism. I’m your host, Jacob Sager. I believe in an artful, ethical and inclusive humanity thriving amongst the cosmos. But I know we can only become those people if we tell the story that inspires us to become those people. That’s what space midrash is about. We’re going to take what we know. We’re going to turn it over, we’re going to discuss it. We’re going to tell it anew in a way that we can hear in the present moment. Thank you so much for listening. Yala. Onward. Shalom Space Midrash is written by me, Jacob Sager, and recorded in Austin, Texas.