18: Narrative Collapse in the Space Age 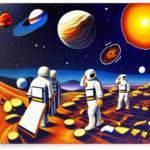 You are listening to space midrash. I am your host, Jacob Sager. I believe in an artful, ethical, and inclusive humanity thriving amongst the cosmos. We are on a mission together to probe the intersection of Jewish civilization in the space age. This is episode 18 of space midrash titled Narrative Collapse in the Space age. It’s an interesting episode to do. I think this is an important point, and I really want to make it clear and succinct for my whole audience so we can refer back to this time and time again.

Narrative collapse is when the underlying story or stories or way that mythologies that underline a society fall apart. Maybe they are challenged by a dominating force that comes in. Simple idea is like the narrative is “We believe in the rock God” and the people of the empire of the water God comes and smashes your temples, and now your narrative has gone, and they can’t keep teaching it anymore. That is like a human on human narrative collapse. Another form of a narrative collapse is that like the society that the stories that supported Soviet Russia were no longer able to hold scrutiny for the average member of the public once they started getting books and radio and television signals coming from the Western world or from outside of the Soviet bloc. Once that started happening, the narrative that was controlling the Soviet Union could no longer hold amongst the people for whom it was supposed to be controlling. That’s another example of narrative collapse.

The thing is, those are two. One is like a very abstract, and the other is a very concrete and very recent example. But the truth of the matter is narrative collapse is the mode of human growth. It is the mode of at least civilizational growth. And what’s meaningful to me is that narrative collapse is actually baked into Jewish self-expression and growth. And if we can understand that, in any generation, Jewish people can seize the moment and become the leaders that the people in the present and people in the future need intellectually, spiritually.

So let’s talk about narrative collapse in the space age. As I’ve spoken in other episodes before what a lot of people knew would come and wanted to have come and have different thoughts on is how the space age and the satellite age would bring about a narrative collapse. Maybe the factionalization and the tribalism that leads to a divided and war-wrought Earth would change if we could just see ourselves from space. And a lot of hippies jumped on that, and we’re really excited, and a lot of philosophers are very interested. And I think there’s a huge positive impact in the feelgood department from seeing ourselves from space. But what really has happened over the last sixty years as we’ve been sending satellites and people into space is that many narratives have collapsed entire states and empires have fallen, entire cultures have eroded out. And entire new cultures have risen and emerged. And I’m not talking about space or anything. I’m just talking about the social fabrics of all the major societies and countries in the world. And that is an effect of being more connected by having technology out in space, such as satellites.

And that is the effect of being able to see the Earth more in different ways and being able to see each other and being able to see ourselves there on planet Earth. Like on our phone, on Google Maps and some way, it really changes things. And so a lot of the stories that have been holding up for millennia, particularly for states and churches, are likely to hit, even if they’re not based off of some archaic and simplistic theology or cosmology.That’s not even necessarily what’s the collapse. It’s that even any other sort of institution of order will no longer have the intellectual and social support of the masses, because what they know or what they’ve come to know erodes their support – there’s no way that they can actually be in line with that anymore. So we’re coming into the space age. We see a lot of them. I gave you an example of the Soviet block, and we’ve only seen that continue to happen with the height of the Arab Spring a decade ago and a lot of the other changes in oppressive regimes around the world since the advent of satellite technology.

But I think we’ll also see other narratives collaps. Big narratives that we think or that people take religiously to last forever, thinking that their governments or whatever it is, will last forever, will infallibly last forever. We’re coming to a point where that’s just not going to happen anymore. 2022 the last five years have seen a lot of change, at least in my country, in the United States, and definitely the last two years worldwide with the covid 19 pandemic. So narrative collapse, it’s happening. I’ve established that fact.

And so what I really want to get into is that narrative collapse in the space age doesn’t need to be a scary thing. It’s actually this awesome opportunity. There’s so many people now, there’s never going to be a dominant society on planet Earth in a way. Like, there’s not going to be this dominant culture. And if there is, um, as a Jew, that kind of grosses me out. So that means there’s the opportunity to be whoever you are. And if your perspective is more mature than some of these simplistic cosmologies or simplistic setups in societies, you can have a lot of power. Though you got to be sensitive with it. If you’re potentially stuck amongst a lot of people who are living in an old-fashioned way, but you’ve got a lot of power to take control in the present moment. Because when a narrative collapses, another narrative can come in its place. But the strongest thing to do is to create a collaborative and inclusive form of storytelling, a form of storytelling that is presently enriching and can be enduring.

And so I don’t know what that looks like. I’m just giving some rough outlines here based off of my larger perspective as a student of history and a student of Jewish history, and as someone who is a former English major and interested in how narratives are constructed and how those affect society. I know that we’re at this place. I don’t know what the next steps look like or what to shape that. And I don’t think that’s the job of one person anyway. I think that’s an emergence of many people, and that is the society.

But the thing is that the narrative that used to run society, the narratives that used around religion, the narratives that gave the kings all the power, aren’t going to hold up in the space age. And as Frank White notes in the overview effect about the opening of the movie 2001 A Space Odyssey, there’s that big black prism, and all these primates are, like, yelling at the one who goes up to it and they’re throwing things at it. What Frank points out is that’s the one that evolved into becoming a human, that’s the one that noticed that there was something different and didn’t just throw rocks at it.

And so that’s the opportunity in the age of narrative collapse. It’s the opportunity to tell a better story and to evolve instead of throwing rocks and sticks and just hooting and hollering like our DNA wants us to do, because we’re slightly more than that. Thank you so much for listening to this ramble. I talked about narrative collapse in the space age. I know this is a rougher episode than most of mine, but I think this is an important part. It is the time for Midrash: to take that story, to turn it over, to tell it anew in a way that we can understand it moving forward. Thank you very much for listening to Space Midrash.