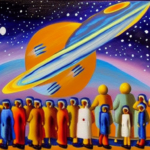 Summer camp is an opportunity to pass along cultural, intellectual, and spiritual values to a new “generation” of campers. Counselors are just slightly older people, guiding the younger ones into the world. In this episode, lets talk about bringing Space into your jewish Summer Camp through 7 ideas for camp programming.

You are listening to space midrash. I’m your host, Jacob Sager, and we’re on a mission to probe the intersection of Jewish civilization in the space age. I believe in an artful, ethical, and inclusive humanity thriving amongst the cosmos, and that starts right here on Earth, and it begins with storytelling.

In this episode of Space Midrash, we’re going to talk about outer space at Jewish summer camp. How to bring outer space into Jewish programming at your summer camp. So this is episode 15 of Space Midrash titled Stargazing and Summer. The topics we’ll go over in this episode include Havdala, starwatching, learning about the Jewish astronauts, learning about Jewish objects which have gone to space, arranging how to show very specific movies that are educational about the Jewish space experience so far. We talk about watching Rocket launches this summer, doing a program Imagining Life in Space that’s an age appropriate discussion on what you’d bring and how you’d live Jewishly in space, and incorporating Jewish educational themes into whatever you’ve been teaching to bring space into that.

My name is Jacob Sager. Today I’m talking about summer camp, which I love. I’m a retired camp counselor who put in a half decade of service rising through the ranks of my childhood summer camp.

Camp transforms people because life is a game of growth against yourself, and the rigidity of real-world institution sours that perspective. Camp helps kids shed the toxic formalities of the real world to discover themselves. It’s also a unique environment to produce activities which can transfer a lot of cultural, emotional, and intellectual meaning from the counselors and the adults at the camp to the campers. I think that Jewish camps in North America have thoughtfully invested in understanding this process and empowering their staff with tools to create memorable and meaningful programs.

Now that we are at the cusp of the space age, I am really excited that we can do more Jewish programming that involves outer space. And it’s not this far off thing. It is very palatable and in the present moment. So in this episode, I want to go over seven ideas for the kinds of programs that can take place at Jewish summer camps this summer in 2022 to incorporate outer space into your Jewish programming. This is Episode 15 of Space midrash titled Stargazing at Summer Camp.

Before we get into a list of seven things you could do this summer at your camp to bring outer space into your Jewish programming, I want to talk about why it’s relevant to do space programming on planet Earth. As far as I know, no campers or camp counselors anywhere in North America are going to be going to outer space this year. Maybe some will simulate at the actual space camps. But we live in an interesting time in 2022 in which last summer, for the first time, commercial space tourism really began opening up and there had been three new Jewish astronauts who all ventured up on commercial trips. Before that, there were only 16. So the rate at which Jewish astronauts is growing means that there’s a high likelihood that somebody at your camp will be going to space.

On top of that increase in space tourism is the fact that human culture is expanding and evolving. And one of the missions and goals of Jewish summer camps around the world is to preserve and reinvigorate Jewish cultures through the youth, through the emerging generation of leadership. And so as space becomes intertwined with the future of humanity, so too does it become intertwined with the future of Jewish culture, jewish civilization, Judaism, Jewish identity. So it is important to own these things in our storytelling and in our self-conception. And what better place to do that than the playground of identity and understanding and socialization that is summer camp? So that’s why I think it is relevant to do space programming on planet Earth. So this is Space midrash episode 15.

Let’s go over seven things you can do to bring space programming into your Jewish net right now. The first thing that you can do is Havdala outside. Havdala is the Saturday night ritual of, uh, looking for three stars in the sky and then making blessings over candles, spices, wine, and the distinction between the holy and the profane. It is a wonderful service and ritual to do outside. There are many beautiful tunes to it. And because the introduction and opening of Havdala is looking for an at stars – as it takes place after dark on Saturday night – It is a great time and space to continue to look at stars, to ask questions, to learn about what is in the sky over your camp every night. So that’s the first thing to do Havdala outside.

The second thing is to watch rocket launches. There are going to be a lot of rocket launches this summer. You can get the Super Cluster app or go to Supercluster.com. They have lists of all the rocket launches and how many are going to be going on. And there are a few dozen that will be taking place between now and the end of the summer, between now and August. And that includes some very interesting launches such as the Virgin Orbit Launch. And what this is is they launch satellites on a rocket from underneath the wing of a 747. It’s a very different kind of launch. It’s very interesting. In July, SpaceX is going to be launching the orbital test flight of the new Starship system, which is their really cool, beautiful, kind of old retro looking rocket. So the second thing to do at campus to watch rocket launches, they’re all kind of learning opportunities.

The third thing to do is a little more formal than the first, which is to actually make a plan over the course of the summer to regularly star watch and track the moon. Part of this helps play into Jewish senses of time and Jewish calendar life in which the new month is marked by the new moon. There will be a full moon on June 14 and a new moon on June 28, another full moon on July 13 and another new moon on July 28. So June 28 & July 28, and those weeks will be great for start watching and also tracking the moon and knowing that those are the new month start. June 29 and 30th are Rosh Chodesh Tammuz and July 29 is Rosh Chodesh Av. July 28 and 29th is a great time to see the Delta Aquarid meteor shower. There’s going to be a new moon, so it should be very dark and beautiful to see. So that’s the third thing you can do. You can watch the stars track the moon and see the Delta Aquarid meteor shower.

The 6th thing is to book a screening of the Space Torah movie by executive producer Rachel Raz. This is a movie about Dr. Jeffrey Hoffman who in 1996 brought up some Torah parchment and read from Bereshit. That Torah parchment was brought back down and is now part of the Torah that they read from in synagogue in Houston. It’s like a half an hour. It’s sweet, it’s very funny at certain points. It’s definitely very educational and the director did an amazing job. It’s just well cut together. Highly recommend it. Check it out. Spacetoraproject.com. That’s the 6th thing.

The 7th thing you can do is to listen to Space Midrash at night. This is the 15th episode and most episodes are at about ten minutes. Try to focus on one topic. You can go through these, make any sort of educational materials, reach out to me if you have anything you want to ask, but the material is there for you to either fall asleep to it or spark discussions that you can have with your campers. So that’s the 7th thing.

Let me go over what the seven ideas are. First, do Havdala outside. Second, watch rocket launches. Third, do star watching and moon tracking, as well as watch the Delta Aquarid media shower. Fourth, learn about Jewish astronauts and Jewish objects that have gone to space. Fifth, make a program about Jewish communities in the future or in space. 6th, book a screening of the Space Torah movie. And 7th, listen to the space mid Josh podcast. Those are my ideas for you.

My name is Jacob Sager. I’m a retired camp counselor who put in a half decade of service rising through the ranks of my childhood summer camp. I think summer camp transforms people because life is a game of growth against herself and the rigidity of the real world. Source that perspective. Camp helps kids shed the toxic formalities of the real world to discover themselves. It’s also a unique environment to produce activities which can transfer a lot of cultural, emotional, and intellectual meaning from the counselors to the campers. I think that Jewish camps in North America have thoughtfully invested in understanding this process and empowering their staff with tools to create memorable and meaningful programming. So I offer you this episode as an opportunity to start doing relevant and meaningful space program here on planet Earth.