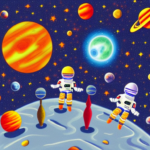 Over 60 years of space flight, many Jewish objects have crossed the Karmen line. Items have been religious, historical, cultural, and personally meaningful to the astronauts that brought them. This episode chronicles those items.

Many Jewish objects have crossed the Karmen line, the boundary between Earth and space. The items have been religious, historical, cultural, and personally meaningful to the astronauts who brought them on the various missions over years of space travel. In this episode, we will chronicle those items. You are listening to space midrash. I’m Jacob Sager. This is Episode 14 titled Jewish Objects Brought to Space.

Hi, I’m Jacob Sager, your space age spinoza. And today we’re talking about Jewish objects that have gone to space. There’s this rich, sweet, and occasionally humorous history to the Jewish objects that have been to space. I’m a millennial homeowner, and among the things I keep, I keep Jewish things that we use and would never get rid of: Judaica, books, loads of books, both acquired, curated, and purchased or inherited cooking stuff, food serving things, holiday items, um, my tallit, my to fill in.

If I were to go to space, I think I’d bring Havdala spices and either a copy of Franz Kafka or Yehuda Amichai poetry with me. Those would be my Jewish objects. I know that you’re so limited in space and in weight and what you can bring.

In the first part of this episode, I want to talk about religious objects that have been brought to space. I don’t know of necessarily too many, and some of them we’ve already touched on in last week’s episode. One of the first things to talk about is a Mezuzah that was brought by Dr. Jeffrey Hoffman onto one of the space shuttles. And the story that goes is pretty funny, in which they were hot bunking, meaning that they were only like, half as many beds as there were crew mates, so they would take shifts as to who was sleeping. And Dr. Hoffman, there was some velcro around his area, and he would put up the mezuzah and to be respectful to his crewmates, who may not be his coreligionist, he would take it down when he would leave, except one day he just kind of forgot. And the hot bunk mate who he had was astronaut Scott Horowitz, who is also Jewish, who said the mezuzah is a nice touch. So that’s a kind of funny story about the mezuzah that was brought to space. Dr. Hoffman also brought a section of the parchment of a tourist scroll, which he read from as we talked in the last episode. And similarly, Ilan Ramon, the 12th Jewish astronaut, the first Israeli astronaut, also brought a Torah on behalf of a good friend who had gotten the Torah while they were in a Nazi concentration camp. And he brought that up as a symbol. And similarly, he was given a microfiche tanach, not just the Torah, but the entire Hebrew Bible. And it was on a credit card. And it was the microfiche tiny. You need a magnifying glass to be able to read it. So those are the Jewish religious objects that have been carried to space.

Now let’s discuss the objects that were brought to space to honor the dead. So Mark Polansky, who was the 11th Jewish astronaut who flew on space shuttles in the first decade of the 2000s, brought up a teddy bear from the US holocaust Memorial Museum. This teddy bear had belonged to a child who perished in a concentration camp. By bringing it, it was in memory and tribute of not just that one last individual, but a whole generation of children who were slaughtered by the Nazi war machine. Another thing that was brought to remember the fallen from the Holocaust was a drawing that was brought up by the 12th Jewish astronaut, Ilan Ramon. And it was a drawing of a moonscape that was made by a young man who perished in Auschwitz. And it was a picture of a landscape on the moon with the Earth rising in the background. And at the time that young person lived and died, there wasn’t even a space program. But that deep imagination and yearning is what leads the space program. And it was an amazing thing to honor. Ramon, as we know, died in the Columbia space disaster in 2003.

Jessica Meir, the Jewish astronaut, she bought a special coin honoring Ilan Ramon with her. In a similar thing on the third blue origin new shepherd launch. Allen Shepherd’s daughter was an astronaut on that flight. And Julie Nimoy, Leonard Nimoy’s daughter. Leonard Nimoy, who played Spock on Star Trek, Julie Nimoy asked Laura Shepherd Churchly to bring a special pendant of the livelong and prosper hand symbol, which Leonardo Nimoy brought to the set and came up with as the Vulcan hand signature. But he remembered it as a symbol from being in synagogue as a young person. So these are the objects that we know of that were brought up to honor that.

Lastly, let’s talk about the objects that were brought to space to celebrate holidays. So, famously, Dr. Jeffrey Hoffman, during a live stream while he was on the space shuttle, began spinning a dreidel. And, um, whoever was emceeing the livestream asked him, what are you doing? And he explained what the holiday of Hanukkah means and the symbolism of the dreidel. What’s funny and interesting is that Jeffrey Hoffman is the third Jewish astronaut. The 7th Jewish astronaut, David Wolff, says that he also brought up a dreidel, and that his dreidel spun a lot more than Dr. Hoffman did. So I think that’s pretty awesome. Also, to celebrate a holiday, the most recent Jewish astronaut, Eytan Stibbe from Israel, who was the second Israeli astronaut and the first Israeli astronaut on the international space station. He was up on the international space station during Passover of 2022. So he brought up a kiddush cup and Shmura matzo, which is very strictly kosher matzah. Certain groups only eat that matzah, and other people avoid that matzah. But it’s it is definitely a symbol of the religious observance of passover. Similarly, when celebrating Hanukkah, Jessica Meir wore cool socks that she brought up with her that donned a menorah and Stars of David, which is just fun and cool. And when you can’t bring a lot of stuff to space and you can’t light candles inside of the space shuttle or the space station or the, uh, Souyez capsule, having some sort of fun, decorative clothing is a great way to go.

So those are the objects we know about to celebrate holidays, and that’s really the core of this episode. Those are the Jewish objects that I know of that have been brought to space. They’ve been brought by astronauts on their own volition or at the request of somebody else. It’s a rich, sweet, and occasionally humorous history to these Jewish objects that have been in space so far. It’s a wonderful slice of Jewish life here in the 20th and 21st centuries. And as space travel and human life and space expands, so will the number of Jewish objects that go up into space. So it’s worthwhile to think about, if you were to go to space, what would you bring along with you?