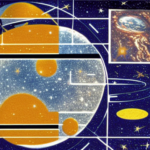 Jewish people who have lived are immortalized not just by streets and libraries on earth but on objects and landscapes in space that may or may not ever experience human occupation. If you’ve played Jewish geography with friends or feel a joyful affinity when learning that a historic figure such as scientist is Jewish then you may find this list interesting. Jacob waxes poetic on naming objects in space, briefly lists some objects named for Jews, and offers resources to learn more.

IAU: International Astronomical Union is responsible for naming and managing naming in space

You are listening to the Space Midrash podcast. This is episode 16 titled Interstellar Jewish Geography. In this episode, we will discuss objects and places in outer space named for Jewish people.

How Jewish people have lived is immortalized, not just by streets and libraries on Earth, but on objects and landscapes in space that may or may not ever experience human occupation. If you play Jewish geography with friends or feel a joyful affinity when learning that a historic figure such as a scientist is Jewish, then you may find this interesting.

You are listening to the Space Midrash podcast. I’m your host, Jacob Sager. We’re on a mission to probe the intersection of Jewish civilization in the space age. I believe in an artful, ethical and inclusive humanity thriving among the cosmos. But we will only become those people if we can tell the story that inspires us to become those people.

Before the space age, names happened over time. They occurred through living and experiencing the place, then through human living and shared identity and colloquialisms. And, of course, change in names occur. In my neighborhood for instance, our city is named for the state’s founder. The neighborhood after an old farm that stood here for the longest time. And our glot of streets is just randomly named after cities in California.

The names of places in space that have been assigned have been designated from Earth on planet Earth, but by human beings.

I’m Jacob, a Jewish guy from Austin, Texas, who was a pretty good connector in the game of Jewish geography. Jewish geography is this game that’s played in which Jews from different places meeting for the first time begin to list out names of people they know in common or from the others locale. Then you can shmooze on some of your favorite shnoors. It’s the arrival at a name and the actual person that you know in common or know of, and then all the history and culture that they brought to both of you that comes out in conversation in the present moment. That’s the game.

I think there’s a lot of meaning to a place that is named for someone. It’s something we do to immortalize others, to remember the things they did, the values they stood for and the world they wanted to see unfold. And I love the idea of naming space. If Earthlings are all there is to name things in this entire universe, we’ve got a vast amount of space to go. And if we meet other species along the way, I wonder if they name things after prolific and beloved individuals. If I were to name some of the moons of a Jupiter or some distant double star system after a Jew, I’d honor Lenny Bruce and Joan Rivers.

While human feet have only touched the moon a few times, the whole lunar surface is named: craters, mountains, plains, valleys. And not just the Moon. This is so for Mars and other planetary surfaces. Similarly: asteroids, moons, exoplanets, and distant star systems have been named. And while some of these namings have come from antiquity in the ancient world, many have been given in the modern age, as we’ve developed the technology to finally see and understand more space.

It should be a no surprise, out of all the objects and places named for people, some of those are named for Jews. And what’s interesting about space age travelers, unlike some human explorers of earlier epochs, is that they will arrive at places that are already named for ancient humans who had thought that they were living at the apex of modernity. So this is space midrash episode 16 titled Interstellar Jewish Geography.

I want to talk about places in outer space that are named after Jews. It’s actually a pretty short list. It’s not very comprehensive. Names in outer space are actually governed by the International Astronomical Union, the IAU, which is the working group for planetary system nomenclature. They are responsible for the naming of different objects in space, different landscapes in space. And they have a process in which you can request names for new objects, and they go through, and they approve it. And they have a fantastic database in which you can search for names of objects. Even searching based off of cultural or ethnic references, which is really interesting and fascinating Because You can get to a lot of cultural and personal meaning.

Now, I actually didn’t know too much about I didn’t really think too much about the fact that there’s places in space named after Jews until I produced the episode about the early Jewish astronauts. And one of the things that I learned is that Ilan Ramon already has a number of places named in space after him, including, like, Hills on Mars. Who knows? One day that could be an industrial park like Ramon Hills is not just something that was named after looking at a map from a satellite image. It’s actually a place where people live.

So the most extensive piece of research on this so far, besides if you were to go to the International Astronomical Union and look through their database by searching Jewish, is in 2016, Gabriella Geselowitz, who was an editor for Juicy.com, wrote an article about the Jewish heavenly bodies about her space, as she titled it, in April of 2016. It’s a really great kind of mashup, and she has a fun riding style. So she points out that there’s so much named after Jews out there. There’s an asteroid named after Albert Einstein. There are asteroids that are named after both Leonard Nimoy and Mr. Spock. Famous Jewish comedians such as Jerry Lewis and John Stewart. Karl Marx has an asteroid. Isaac Asimov, the famous science writer and science fiction writer, has a planet, of course, which he deserves. She deserves a whole black hole. There’s a planet called Simon Garfunkel, after the famous folk rock duo of two Jewish friends who are no longer friends, nor talking to each other. There’s just so much out there named after Jewish composers and Jewish thinkers. There are places named after Jewish scientists and astronomers and astrophysicists.

There’s so much naming. So if you go to the episode links for this episode, you can find a link to the International Astronomical Union, where you can search up more information about these objects named after Jews, as well as the article by Gabriella Geselowitz. And I just think it’s interesting that so many of these people for whom these objects are named, whether they’ve lived in the 20th century, they lived up until recently in the 21st century, or they died hundreds years ago, they all thought they lived in the apex of modernity. They really thought that they were at the height of human technological prowess and opportunity. I love the idea of naming space. I really do. I think there’s a lot of meaning to a place that is need for something.

And it’s something we do to immortalize those people, to remember the things that they did, the values they stood for, and the world they wanted to see unfold. So as the world continues to unfold and human life expands beyond planet Earth, we will find ourselves living and traveling and visiting to other places. And out of those many millions of objects that are being classified, many of them are being named after our fellow Jewish people. And it’s worth celebrating.