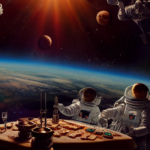 Before the inaugural Blue Origin and Virgin Galactic flights, there had been 16 Jewish astronauts, all professional. Since last year, 3 more Jews have ventured into space. These new Jewish Astronauts embody the intersection of Jewish and Space Age values. This Episode briefly recaps the missions of Jared Issacman (SpaceX), William Shatner (Blue Origin), and Eitan Stibbe (Axiom Space).

Space age values are Jewish values. In particular, the values of leadership, storytelling, and inclusion are the Jewish values that are embodied by Albert Einstein and are, uh, the values that are going to take us forward it into the space age today. Let’s explore how those values are embodied by the three newest Jewish astronauts. You are listening to space midrash. This is episode twelve titled the New Jewish Astronauts. In this episode of Space Midrash, we’re going to briefly profile the new Jewish astronauts, tying them to the themes of leadership, storytelling, and connection.

Those are the flights of Jared Isaacman on the Inspiration SpaceX Mission in the fall of 2021. William Shatner on the Blue Origin flight in October 2021, and Eytan Stibbe aboard the Axiom Space Ax one mission to the International Space Station in spring of 2022. I am Jacob Sager, the host and creator of space Midrash.

There’s a new context to space travel, to astronauthood, and how we, the people of Earth, can take part even if we don’t go up in a space. Before the inaugural Blue Origin and Virgin Galactic launches in the summer of 2021, there had only been 16 professional Jewish astronauts so far. Since that time, there have been three more. And that number will only increase of all the trips into space. The missions with Jewish participants have specific historical and social meaning worth considering.

We are at a Steve Jobs revealing the iPad moment right now. It looks like a dinky little piece of technology that’s being shown by a really rich dude to a bunch of other nerds on the inside. Really what it means is that the entire playing field has changed and we’re going to all start having a piece of space that we’re going to be carrying around in our own pocket, figuratively. We’re at this moment right now.

It’s like this Columbus moment. And these astronauts are getting on these Blue Origin flights. It’s like they’re getting on the Nina, the Pinta and the Santa Maria, and they’re charting the initial behaviors for whole society to follow. If you are Jewish and interested in going into space one day or participating in a space mission from the ground, then consider the mission of these three astronauts for your inspiration. This is Space midrash episode twelve titled the New Jewish Astronaut.

So, the first Jewish astronaut to talk about in the new class of consumer astronauts is Jared Isaacman. Jared Isaacman is the 17th Jewish astronaut. Jared Isaacman is a pilot, a philanthropist, businessman, and a high school dropout. He holds a record for solo piloting around the world. And the SpaceX mission was particularly different than a lot of the missions of private space travel last year in that Jared Isaacman, a billionaire who chartered this flight, did not take up his employees. He did not take up his siblings, he did not take up his family members or best friends. He opened up the seats for charity. These were one through donating money. They were one through contests that were thoughtfully selected. And the crew ended up being this very beautifully orchestrated crew of four.

And instead of just being there for the sake of this pilot, to have fun and see his view, their mission was actually to raise money for St. Jude’s. And it’s very likely that they raised more money than it costs to go to space for St. Jude’s. They raised hundreds of millions of dollars for St. Jude’s Hospital. And it’s just unlike any other trip. It was not an ego flex. It is not a selfish, personal thing. It’s this mission to inspire, to do something greater, not just in space, but something greater for real suffering people on planet Earth. The value embodied here by Jared Isaacman, the Jewish value and space age value is the value of leadership, real leadership. And that’s an important one. There’s billions and billions of us people here on planet Earth and we have an infinite amount of space to expand into. But we need each other. We need each other. So kudos to Jared Isaacman. Kudos to the inspiration for crew and the thousands of people who made this happen and the thousands of people who donated money to St. Jude’s. This is what leadership looks like and this is the embodiment of what leadership should be in the space age.

Next, we’re going to talk about William Shatner. William Shatner is the 18th Jewish person to go to space. Captain Kirk is synonymous with space leadership. So it was poignant that Blue Origin gave a seat to William Shatner in its second man flight in 2021. Shatner, who was already in his 90s, became the oldest person to go to space, snatching the record from Wally Funk, who had earned it just weeks before. Upon landing, Shatner, who is known for being long winded, began to wax poetic about the experience and its impact on him. And he continued to share this message in his interview touring. It was a message of hope, a message of being inspired, and a message of how fragile and special our life is here on planet Earth. I’ll include a link in the episode, links where you can watch William Shatner and Jeff Bezos discuss what it was like to see the thinness of our blue sky against the infinite blackness of space. It’s moving and it’s meaning and poignant. And so William Shatner, the actor, is long winded as he was, and as full of himself as some people might find him, was in awe. I mean, William Shatner was in awe, he stood there in awe and he used his poetry and his speaking to try to convey as much as you could to us. And there is some amount where you can listen in between the words and hear the ineffable there.

But it’s that being an awe that is an important space age and Jewish value. The cosmos is infinite and our stories can barely begin to describe what we know and don’t know. But that’s what we need. We need these words for each other. There’s thousands of pages of engineering, there’s a thousand people on microphones and walkie talkies working on this mission. But at a certain point where you just got to look up and out and just let it happen to you, there are no words. There is just the experience. William Shatner standing in awe, expressing his journey, is the value of storytelling. And it is the Jewish value for the space age embodied by William Shatner.

Thanks for listening to Space Midrash. This has been episode twelve the New Jewish Astronauts. In this episode, we talk about the three Jewish commercial astronauts who have gone to space in the last year and how their missions and the way that they hold themselves embody the Jewish values that overlap with space age values. I was really inspired by all three of these missions and all three of these men. I look forward to doing more episodes like this to chronicle future Jewish astronauts.