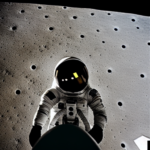 2021 saw rocket launches almost every other day. Among those launches, there were three poignant moments that involve Jewish people and Jewish objects.

Wikipedia List of Jewish Astronauts (including Issacman and Shatner): https://en.m.wikipedia.org/wiki/List_of_Jewish_astronauts

My name is Jacob Sager, and I am charting a course for Jewish leadership in the space age. You are listening to space midrash. This is episode five titled Jewish Moments in Space Tourism 2021. We’re going to talk about poignant moments in space tourism that are related to Jewish civilization. They involve Jewish people and Jewish objects. The three events we’re going to discuss have actually taken place since Rosh Hashana, so they are part of the current Jewish year, although they were in 2021.

We’re going to talk most recently about how on the last Blue Origin new shepherd 19 mission, Julie Nimoy, daughter of Leonard Nimoy, who played Spock on Star Trek, sent up a special pendant. We’re also going to talk about how William Shatner, who played Captain Kirk on Star Trek, also went up on a new Shepherd Blue Origin mission and waxed poetic upon landing. And lastly, we’ll talk about Jared Isaacman, billionaire and philanthropist, who chartered the SpaceX inspiration for Mission and raised hundreds of millions of dollars for St. Jude’s Cancer Research Hospital. All of these moments were particularly Jewish, not just by the people who took part, but by the sentiment and the meaning and the inspiration that they offered.

My name is Jacob Sager. I am a father of four from Austin, Texas, who was inspired by what people can accomplish in space. The new space age is on, and since the sky is the limit, we’ve all got the opportunity to lead. Human culture is going to expand beyond Earth, and in doing so, it’s going to affect our lives here. With thousands of years of struggle and celebration. Jewish civilization is uniquely poised to both handle and offer leadership during the existential shifts coming with the space age.

I’m a serial entrepreneur and an aspiring media ecologist, and I’ve always been fascinated by the human space program. And while I didn’t pursue a career as a scientist last year, after reading Frank White’s The Overview Effect, I became inspired that the space age will also require philosophers and storytellers that there was an opportunity in a place for me and an opportunity and a place for all of us. So I started Space Midrash to chart the course for Jewish leadership in the space age because I believe in an ethical and artful humanity thriving amongst the cosmos. But that will only happen if we can tell the story that will inspire us to be those people.

You are listening to space midrash. I’m Jacob Sager. This is episode five titled jewish Moments in Space Tourism 2021. The first thing we’re going to talk about is a special pendant that was sent up on a Blue Origin rocket on December 11 of this last year, 2021. There was the new shepherd 19 mission, which had a wonderful diverse and inclusive and thoughtfully curated crew that included Michael Strahan. But they also sent up Laura Shepherd Churchly Shepherd, She is the daughter of Alan Shepard, the first American to go into space. And he was there maybe just as briefly as these Blue Origin passengers.

The daughter of Leonard, Julie Nimoy, offered a pendant that she wears around her neck. That is the live long and prosper hand symbol that Leonard Nimoy brought to the set. That is the symbol that the cohen gadol would hold with their hand. In making a blessing over the Jewish people. Nimoy approached Laura Shepherd Churchly, who was happy to bring it.

What Julie Nemo told space.com was that her father was proud for inspiring a generation of astronauts and scientists and engineers and that he would have loved to have gone up in space, even for just a moment, like on one of these Blue Origin trips. He would have used the opportunity to inspire more hope and more humanity and more science and more space.

There’s a rich and interesting history of astronauts bringing different objects up into space. Mementos for themselves, mementos in honor of the people that they worked with who couldn’t make it to space because they had died, mementos of people down on Earth that they’re connected with or who asked a favor just to bring it to space because it means something.

It’s poignant that both Julie Nimoy’s father, Leonard Nimoy, who played Spock, and Laura Shepard Churchley’s father, Alan Shepard, the first American to go into space, that these two people are personalities who have inspired the best for space and people. And it’s so poignant that the two of them connect and share that they are the descendants of these people and that they are continuing in their generation and can share it through an object.

And for Julie Nimoy to send up this pendant, which is this beautiful and rich symbol within the universe and the storytelling of Star Trek, but it is a symbol that is pressed from the Jewish consciousness into Star Trek and into the greater consciousness. And that’s what makes the Jewish sweetness between these women and sharing the historical meaningfulness of this was really awesome. So that’s the first important Jewish space tourism moment. Julie Nimoy sends up a live long and prosper pendant in honor of her late father, Leonard Nimoy.

So the second poignant moment in Jewish space tourism from this last year 2021 or the current Jewish year was William Shatner. Kirk kissed the Carmen line. Shatner saw space, and it greatly affected him, and it was amazing.

Blue Origin is playing a big marketing game, and by all means, it specifically picked a lot of celebrities along with their curated high ticket passengers. But by sending up William Shatner their goal really is to bring everyone into the space age. William Shatner had taught us and talked to us so much about space fictionally, but he inspired, just like we mentioned Nimoy. It inspired so many people to go into the engineering and into the science and to be astronauts.

And it’s a poignant moment. If you saw him right after they got out of that capsule. And he was speaking to Jeff Bezos. He says, “Everybody in the world needs to do this. Everybody in the world needs to see it. It was unbelievable, the little things, the waitless… But you could see the blue color whip by you, and now you’re staring into blackness and then it’s gone. It was so moving. This experience did something unbelievable. What you’ve given me is the most profound experience I can imagine. I hope I never recover from this.”

And Shatner went on and on, but you can still see him on the news circuits. He also continues with the same sparkle in his eye. And he had this beautiful message of looking up, and I’ve never heard anyone say it like this. He says, you look up and you look out and it’s death. And you look back down and this we are life. We are the life. And that was just amazing and beautiful. And it was a thoughtful moment to send up Shatner. I’m sure he paid for his ticket, but he got to cut the line. He got to go up there first. He got to see there and speak to us about what he saw. That is inspiring. That is a fulfillment of Star Trek dreams. That is a fulfillment of what it means to be a Jewish leader and Jewish storyteller for humanity. So Shatner saw space. Kirk kissed the Carmen line.

The last moment I’d like to talk about is the Inspiration4 SpaceX mission. This launched on September 16. It was actually erev of Yom Kippur. When this launched, this mission was truly inclusive. Jared Isaacman didn’t bring any family or employees. Instead, he led a campaign of hope and possibly raised more for St. Jude’s Cancer Research Hospital than he spent to charter this mission.

While he’s an experienced pilot and space enthusiasts who funded this trip from his wealth, isaacman’s chartered mission was not an ego flex. It was this inclusive mission of hope. Both for humanity, but also for the space program. But most importantly, it was an outstanding philanthropic success for real suffering people on planet Earth. And that mission, that crew was a beautifully inclusive crew. The other three seats were not people that Jared Isaacman picked himself. Hailey Arsenaux worked at St. Pete’s Hospital and is a child cancer survivor and is a fantastic representation of the mission and the charity that they’re standing for. But sbe is also a true representative of the mission down to the people they’re helping. She went up into space and she gets to continue working with young people who she is inspiring beyond their sickness. It’s amazing.

Christopher Sembroski won his seat in a charity raffle. He donated money to St. Jude and his Friend donated and gave him the ticket. And Dr. Sian Proctor, who is also a scientist and a pilot, actually won her seat through a poetry contest. Since being on this mission has come back and been an inspirational voice and is a leader in space science and space travel and ethical leadership in space. So kudos to the crew, to the thousands of people who supported this mission, and to the many more who raised money for childhood cancer. This is what leadership looks like. This is how you change the world. This is how you connect people and make things happen.

Thank you so much for listening. This has been episode five of Space Midrash Jewish Moments in Space Tourism 2021. In this episode, we talked about poignant Jewish moments in the new space tourism of the last year or the current year, since it all happened since Rosh Hashana. We talked about a special spot pendant that Julie Nimoy, actor Leonard Nimoy’s daughter, sent along on the most recent Blue Origin mission. We talked about William Shatner and the profound message he was inspired to share following his Blue Origin trip. And lastly, we talked about Jared Isaacman, who chartered the SpaceX trip that raised hundreds of millions of dollars for childhood cancer research and inspired so many. These moments are just the beginning. There’s going to be more space tourism, and there’s going to be more culture in space, and there’s going to be more opportunity for Jewish leadership.