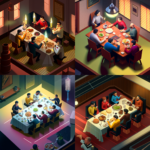 In this episode of Space Midrash, Jacob discusses the death of Spock in the Start Trek movie, Start Trek Two, Wrath of Kahn. In unpacking some of the plot and motif, Jacob explores how Spock’s funeral scene relates to the Jewish pracitces of Kaddish and Shiva. From there, Jacob probes why he thinks we need to talk about dying as part of Space exploration and how Jewish mourning practices should join human settlement in space.

This is episode four titled sitting Shiva for Spock. In this episode of Space Midrash, we’re going to talk about Spock. And in particular, we’re going to talk about Spock’s death in the movie Star Trek Two. I apologize for any spoilers, but the Star Trek universe is just as rich and vast as our own, so there’s plenty of space for you to find out more about Spock without having the end of the story ruined by me here. I apologize to any Trekkies in advance who I may trigger by asserting my own perspective on what any of the Star Trek universe might mean. It’s all open to our own interpretations, and I hope to be accurate to the canon in what I’m discussing.

In today’s episode, we’re going to discuss Spock’s death in Star Trek Two. At the end of the movie, Spock dies, and there is a funeral for him, and his casket is sent off into space. I want to talk about death in space, which is an uncharted and uncomfortable topic, but I think that by exploring the death of Spock and opening up some questions around it, we can open up a Jewish conversation about life and death and meaning in the space age. So this is episode four of Space midrash titled Sitting Shiva for Spock.

At the end of Star Trek Two, Wrath of Khan, Spock goes into the Warp Core to save the ship, and the radiation is too much, so he becomes to the death of that radiation. And then in the final scene of the movie, Spock is in a casket that is like a torpedo and the members of the crew are all standing around.

In particular, in that movie, they are exploring new technology for terraforming. So his casket is going to Terraform a planet. But that’s not what I want to get into. I want to get into what Kirk says is he’s eulogizing his friend. He says: “We are assembled here today to pay final respects to our honored dead. And yet, it should be noted, in the midst of our sorrow, this death takes place in the shadow of new life, the sunrise of a new world, a world that our beloved comrade gave his life to protect and nourish. He did not feel the sacrifice a vain or empty one. And we will not debate his profound wisdom at these proceedings. Of my friend, I can only say this: Of all the souls I have encountered in my travels, his was the most human.”

And that was a quote from Kirk right there before they launched out Spock’s casket into space. Now, Spock is an interesting character because he’s a Vulcan, and Vulcans are so close to humans, and he is actually half human, half Vulcan. His parents had a diplomatic marriage to bring both worlds together. But what’s interesting about Spock in particular is Leonard Nimoy is a Jewish actor from Boston who created this role and gave him his iconic look and brought in the live long and prosper hand symbol, which is of the Kohen Gadol. It’s a Jewish hand symbol.

And the character of Spock allows us to explore and look at the Jew in the future. There’s this piece in which Spock, being half human and half Vulcan, relates so much to the Jew in the world who is of a Jewish consciousness, but is also a human participant in humanity. And there’s a conflict between the two, but that who we really are, ultimately, is human.

What’s particular about Kirk’s Eulogy is that he doesn’t mention anything other than the dead. He just mentions Spock. He doesn’t mention any belief system or what they think is going to happen. That, to me, is interesting. And it reminds me and makes me think of the Mourner’s Kaddish. The Mourner’s Kaddish being one of multiple Kaddishes a certain prayer that shows up in Jewish prayer services.

But towards the end of the service, there’s a particular Kaddish in which those who are mourning, the survivors of those who have died, are there to stand up, and we’re there to support them during this particular prayer. And what’s strange and interesting about this prayer is there’s nothing about mourning and there’s nothing about death. But that’s not because the experience is to exclude that, rather it’s that the survivors of the dead are who we can honor.

There’s some interesting contrast there. And so I think about Spock’s death, because Kaddish and Shiva are these existential tools that we have. They allow us to not deny death or make up some story or fairy tale or some sort of emotional justification that will pass away. These are existential tools that allow us to just let it happen, to embrace the feelings, the confusion, the loss. There’s this depth of human existence that is felt in the death of another person that cannot be prepared for, only dealt with by going through it.

And so Shiva is this process for sitting for seven days after the death of a loved one, and you continue to mourn for a whole year. If someone is in your life and then they’re gone, You’re forever affected by that. And as we come into the space age, with more people going out into space, it’s always risky. How will we manage death? How will we talk about death? How will we mourn?

It’ll be hard being on a spaceship, being on any sort of colony on Mars. You’ve got work to do. And if one member of your team is gone, there’s more work to do. And it is a life or death situation moving forward at all times. So these are the kinds of questions that we need to begin asking ourselves going into this new space age. That it is not just about building a life of meaning. It is not just about discovery. It is about living and dying meaningfully. It is about supporting people in their true human emotions as a result of what will actually happen.

As we look forward to the space age, most of the conversations are about technology and huge futuristic shifts in society. But at the same time we need to actually ask what doesn’t change and what is going to stay the same and what is so true to us that we really need to consider how we need to keep it true in the future and how we mourn the death of our friends and our lovers and our family members is very important. And it’s actually a very Jewish thing because at every age and every time humanity death happens. And in Jewish history, there’s a certain level of perpetual tragedy and death in which the conversation about how do we handle death comes up. The psychology and sociology of mourning is very Jewish.

So we need to take things like Kaddish and shiva and these different tools that we use to handle death and take them with us as we leave this planet, we go further into space. Ironically, the next Star Trek movie is called The Search for Spock. And no spoilers as to what goes on there. It’s just a lot more to Spock in the Star Trek universe. But I wanted to take this moment out because to me, Kirk eulogizing Spock was one of the most Jewish moments in all of Star Trek.

When the drama and the entertainment value passed, I was only left with questions about what this could mean to me. So I offer it to you, dear listener. How do we sit shiva in space? How do you sit shiva for Spock? How can we embrace the psychology and the existential malaise, the existential burden of surviving the death of a loved one, of surviving the death of a crewmate in the space age? I don’t have any answers for this, but this has been episode for Sitting Sheva for Spot. Thank you for listening to the Space Midrash podcast. I’m Jacob Sager, and this has been episode four, sitting Shiva for Spock. I’d love to hear what you think about sitting shiva in space and sitting shiva for Spock. What would that look like? What needs to change? What do we need to keep the same? Let’s keep this conversation going because there are going to be more people in space. We’re going to bring our whole lives out there, and we’ll also bring our deaths out there. Thanks for listening to Space Midrash, episode four. This was kind of a heavy episode, also a light one. So: live long and prosper.