10: Our Seder in Outer Space 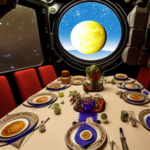 Passover and The Space Age go together. Before this podcast, Jacob began considering the impact of the Overview Effect on Jewish communities Worldwide. The Overview Effect being the cognition or experience of viewing the earth from space or in space. He wrote his original thoughts in an essay on Times of Israel blogs in 2021. In this episode he reads the article. You can find the article here:

Passover, I think, goes hand in hand with the space age. They’re both intergenerational sagas that have this amazing ending point that is story we’re reaching for and we can only imagine. You are listening to Space Midrash. This is episode ten titled “our Seder in Outer Space.”

I’m Jacob Sager. I live in Austin, Texas. I’m a father of four, and I’m getting ready for Passover right now. I believe Jewish civilization can provide cultural leadership and possibly even become the dominant human cultural form in the space age. In particular, I think that awareness of the overview effect can thrust humanity more quickly into the space age or more deeply, or that it’s this paradigm shift that we need to at least be present to where we are in the space age. And I believe that I can share and penetrate this idea deep into Jewish communities. But I’m worried if those communities are ready to consider it.

The overview effect, which I’ve mentioned before on this podcast and allude to in the piece I’m going to read, though I didn’t know the name of it at the time I wrote that piece, is The Experience of Seeing Earth from Space, cataloged by Frank White, who interviewed the astronauts about that experience. And when I began to think of the overview effect in the Passover Seder, they went hand in hand for me. They made a lot of sense. They were very complimentary to one another, because it was about how a bigger or a different perspective looking back changes your story, how’s your story going to shift in the way you’re going to talk to people about it. So I wrote this piece in March of 2021 and put it on Times of Israel on the featured article on the public blog Spring Passover. And so I’m going to read that now.

There’s going to be a seder in space in the next few years. It won’t be a lot of people, at least not the first night. But we, the Jewish people, are totally unprepared.

When seeing the earth as a whole from space, astronauts have described an expansion in their consciousness. As their viewpoint grows to include the whole world, their compassion and personal journey for meaning also expand to include all of humanity. They return energized, bigger than when they left.

However, we the Jewish people, who have long ago spread across the world, can’t even accept ourselves. We justify xenophobia, ethno-centrism, and competing historical accounts to exclude fellow Jews. For the emerging generation colonizing space, we need to reconceptualize ourselves, the Jewish people, as a civilization. We are not a singular Judaism nor a singular Jewish culture. Rather, we are part of an ancient yet richly enduring enterprise of many Judaisms and many Jewish cultures.

Passover is a medium to relive and therefore recreate our origin story. It’s an age-old technology to articulate ourselves: past, present, and future. Just as astronauts leave the established world into the infinite possibilities of outer space, so too did we leave the dominant civilization in order to be free. Like the astronaut seeing the continents and oceans as one, at the seder we experience the Jewish story across epochs as a whole continuing through our voices. Both are multigeneration sagas, journeys into the unknown. With the Exodus, it’s our duty to retell it, to relive it. With the space age, it’s here, and there is no time for our bread to rise.

There’s a joke about a lone Jew in space, or a desert island, somewhere remote. Though alone, there’s two shuls – the one they go to and the one they’d never visit. There’s an honesty to the quirky and contradictory depiction of the Jew in the joke, resonant of the relationships many have with their own communities.

From the outside, though, the joke is sad. Ingrained social division echoes the fearful, disparate tribalism of a primitive, pre-Exodus humanity. The joke probes the assumptions of a “true” Judaism, resonating the objection to and exclusion of many Judaisms and many Jewish cultures.

When we recall the Exodus at the Passover seder, we retell of all the tribes, together, yet still distinct in their tribe-hood. What’s lost on the Jew in the joke, who is play-acting a shtetl-mired mindset, is the opportunity to live in the present and to create the future.

While the joke is enjoyed by religious and secular Jews alike, it reflects a divided people. This division is real, resting upon the fallacy of historical Jewish homogeneity. A fallacy that Jewish civilization ought to be one thing, and that all Jewish people were once of a certain lifestyle and will return to a certain lifestyle again. However, it’s not history, it’s not the future. It’s not even Torah: It’s a mythology.

Typically, the simplicity of such thinking relegates xenophobic communities to rural social peripheries. However, adherents of such Judaisms have extensively lobbied and marketed to have their mythologies dominate our civilization and define our identities. They have effectively obstructed opportunities for inclusivity with the mosaic of Jewish peoples that make up our civilization.

Instead of a civilization dominated by mythology, we need to live mythically with one another. The media theorist, Marshall McLuhan, offers a distinction between consuming mythology and living mythically. Mythologies are stories told to explain the unknown. Living mythically is an attempt to forgo a point of view switching to “a mode of simultaneous awareness of a complex group of causes and effects.” Modern youth live mythically. They are not looking in the rearview mirror, as McLuhan would say, they are not attempting today’s work with yesterday’s concepts.

When I studied at the Conservative Yeshiva in Jerusalem, our Rosh Yeshiva, Dr. Rabbi Ritchie Lewis would say in response to questions formulated “…doesn’t Judaism say…” something like: Be Careful. Judaism is thousands of people over thousands of years speaking on thousands of issues.

To which I add, we are a civilization, of many Judaisms and many Jewish cultures. To be a light to other nations and beyond, we need to accept ourselves.

It’s likely there will be seders in space within the decade and seders on Mars not long after. If it’s not earthly gravity, is it still kosher? If the participants are mostly gentile, from earth or beyond, is it still Jewish? Are people disconnected from the Matzah if its printed from a machine? When heading to Mars, without the intention of returning to Earth, what do the words “next year in Jerusalem” even mean?

Astronauts will be limited in what they can carry but they bring forth humanity. The space age ethos for discovery is absolutely Jewish but is incongruent with fallacies of homogeneity. The universe is vast, and our stories barely imagine what we don’t know.

Being in awe, including others, and asking better questions are Jewish values and necessary skills for the space age. They’re embodied by Albert Einstein and they are the process of the Passover seder. If our civilization is to persist in the space age, Jews must welcome other Judaisms and Jewish cultures in their story of our people.

Jewish civilization is unprepared for the space age so long as we project our past into uncharted possibility. Just like the Jews leaving Egypt, we, the Jews at the dawn of the space age, go forward boldly. We will once again be limited in what we can bring yet unlimited in who we will become.