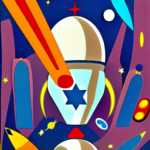 This episode explores anti-semitism as it can occur in the Space Age. Beginning with Mel Brooks’ famous “Jews in Space” skit and continuing into the last years’ headlines of wildfire-starting Jewish Space Lasers, Jacob explores how anti-semitism can emerge socially through propaganda, as well how the space age could empower genocide. There’s some jokes but the serious question remains – to recalibrate our enemies perception, how can we tell a better story?

Mel Brooks’ History of the world: Part One ends with the iconic skit “Jews in Space” in which a Star of David spaceship full of stereotypically looking religious Jews singing in unison as they fight off enemy craft. It’s hilarious to all audiences and in its simplicity it ages well. However, this depiction of the space flight enabled humanity where Jews are still separated and individually defending themselves lands well because of its historical accuracy. While Jewish identity has largely been shaped by exclusion and survival, I wonder if we can consider a Jewish civilization in the space age without defining or reducing it to some sort of antisemitic joke.

You are listening to space midrash. This is episode nine titled “Antisemitism in Outer Space.” Let’s explore how antisemitism could and already has occurred in conjunction with outer space and the space age. I’m Jacob Sager, a native Texan and Jew who recently saw Nazis hanging a banner off a highway in my hometown. As long as there have been Jewish people, there have been enemies of the Jewish people. The hatred and discrimination can take many forms, from interpersonal to social beliefs to social stratification to genocide.

However it manifests, it begins with stories. Headlines in 2021 about space tourism were preceded by a story of an American politician saying California wildfires were caused by Jewish space lasers. Many responded with jokes, a fitting Jewish response, like the Mel Brooks skit. However, of all the horrible things the comment indicated down on Earth, it shows that antisemitic propaganda is being drawn into the space age.

I’m Jacob Sager, a former camp counselor who once built and sold a social network. I believe the pursuit of the space age offers so much opportunity for humanity to grow and to heal. We’re just at the beginning and everything space will only increase accordingly. I’m concerned with antisemitic tropes entwined to emerging technologies for both the public perception of space, but of course also for the wellbeing of Jewish people and ideas in the present and into the future.

The instinct is to make make a joke, but maybe this is really the opportunity to tell a better story. This is Space midrash episode eight titled “Antisemitism in Outer Space.” Let’s discuss how antisemitism can occur in conjunction with the space age in terms of social exclusion, propaganda and genocide.

So the first thought and idea about antisemitism in the space age is the social exclusion, the kind of discrimination and bigotry that occurs not just in terms of antisemitism, but racism and sexism and other things that have excluded people from being astronauts. From what I’ve seen, I can really only find kind of anecdotal evidence, even mostly more with the Soviet space program of deliberate exclusion of Jewish individuals or a lack of opportunity for certain promotions. Looks like in the United States there was just this general exclusion. It was only the bright white flyboys who were getting the early first 30 years of being astronauts. Then after a certain point, very intentionally the doors open to females, to people of color. And once those rings opened up we started seeing Jewish American astronauts. And at this point in time, the number of Jewish astronauts is ten times the percentage that we are of the normal population. So there’s that interpersonal exclusion that can exist, I think, the most important one to start with because it is an easy way for anyone in the space age to stand for values of inclusion for other people regardless of their race, ethnicity, religion, culture — whatever it is, how they identify themselves.

The next form of antisemitism in conjunction with the space age is propaganda which we’ve already discussed. Here in the United States, a politician blamed wildfires on a Jewish space laser. Which is troubling in that she didn’t invent whatever crap she’s spewing. There’s definitely a lot of other people who must be consuming very similar things.

So if they have that one thought how big is their story about Jewish space lasers and Jewish interests being able to have assets in space which they are using maliciously? So propaganda is one of the main ways right now that I see anti Semitism emerging in conjunction with the space age. It’s serious and it’s dangerous because ideas are the strongest force out there and so it’s scary.

And what’s interesting about that in some ways is that antisemitic conspiracy theories have long related to outer space in some ways. Because some of the older occultist antisemitic literature that predated but inspired the Nazis, they had beliefs in which not only are Jews not human but not earthly in origin or at least motivation. There’s this otherness and that’s a frightening thing. And that is not new.

It’s not new at all. Historically, it reemerges all the time and is a general shape. But how do you fight that shape? What type of ideas and stories need to go into effect? Because at some point this is not a war between two groups of people. We are all people. And they used to say we’re stuck here on the world. Well, we’re not. We can go into space and in every direction and eventually more people can do that. So we want to live and work with these people and we need to transform their limited and hateful beliefs. How do you do that? It’s through storytelling. You need to have a better story than the Jewish space laser story.

So the next thought is how could space relate to genocide? This is an important one. Earth orbit provides a certain offensive capability set that warfare on planet Earth did not have before. And for human colonies and settlements that will take place off of Earth, whether in space stations on the moon Mars or somewhere else, the life systems there are vulnerable. So the use of technology to take out groups of people in large mass either from weapons that are using orbit or to maliciously take out some sort of colony of human settlers somewhere in space is a very capable thing. And that would be the motivation by a human actor. Trying to do those things would be genocidal, because that’s the opportunity they have. They can kill everyone. That’s just something to be wary of, because the example of the Nazis in Germany and their use of all their technology for genocide of one of the greatest scales is a lesson that rings in our head. And so space technology gives a lot more power, and we need to be weary of genocidal maniacs and hateful cultures. So those are the dimensions of antisemitism as they could occur in conjunction with the space age. I want to close up with this anecdote, which is the Nazis had some of the greatest aerospace engineers. That’s where rocketry came from. So following World war II and the collapse of Nazi Germany, the United States actually brought in a lot of Nazis who were rocket scientists. And some, uh, of this was done in secret. They contributed their mathematical and engineering prowess to the Nazi war machine, into the genocide of Jews, and to the destruction of Europe, and they came to the United States. And our space program in the space race against the USSR was on. And so a lot of these people who were working in many of the different parts of NASA. And there were Jews there. And a lot of people knew who they were. And they came to know each other and to work together and to solve the greatest problems humanity had because they were in a brand new context. And they could tell a new story. A better story. A bigger story. Which was. How are we going to get people to the moon safely and return them back? How are we going to do this? That is inspiring. I mean, take it for what you will. It might not be so exciting to other people, but I think that there’s an opportunity through storytelling in the space age and through some of the greatness we are trying to achieve collectively, to recalibrate the enemies and the haters into something greater.